Do you recall Gordon Gekko in the 1987 film Wall Street, swaggering along the beaches of Long Island with what resembled a brick clamped to the side of his head?  We may laugh now, but he was one of the lucky ones, in fact the mobile phone was a symbol of wealth, power, and yes, the upwardly mobile!

How times have changed; a mobile device the size of a Mars Bar can now be found in the hands of the wealthy and among the poor. There is no longer a class distinction and the evolution of the mobile has led to the development of a device that enables business to run 24/7 whenever and wherever you are. It’s a confronting phenomenon that you can buy your next grocery delivery online, date, relate and socialise without leaving the comfort of home. We are however still waiting for the App that can clean the house and hang out the washing, but it will happen! 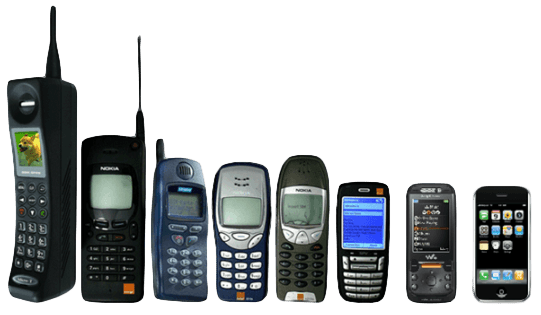 A bit of trivia…..film genre and the mobile phone evolutionary process!

Samsung Galaxy – weight approx. 116g; user: David Beckham (we have this on good authority from Coolspotters. I believe we have a few in the newfocus lunch room too!)

What does this mean for your business?

Recent ABS statistics reported that there were over 12 million internet subscribers as of 30 June 2012 (over 10% annual growth recorded). In addition, as of the same date, there were 16.2 million mobile handset subscribers active in Australia (an increase of 7% from December 2011).[1] Statistics also show that:

With such a large number of subscribers, it is little wonder that organisations across the country have turned to the mobile world to communicate with their customers, stakeholders and the general public. Mobile application and mobile websites have now become a mainstream method in which we communicate.

Mobile technology statistics have recently prompted a rethink in the market research industry not only about how best to contact but how to connect with smartphone users. More specifically, compelling market research agencies to investigate appropriate research capabilities for mobile devices, including the ability to conduct online research via smartphones and collect primary and passive information through a smartphone application.

With rapidly diminishing access to the population through landlines, it is critical researchers encourage the inclusion of mobile users in sampling frames to ensure the large scale accessibility of Computer Assisted Telephone Interviewing methodologies are maintained. At newfocus, we work with our clients to address the limitations of existing research methodologies and ensure the most reliable and robust sampling frames are considered.

A recent article published in Harvard Business Review on mobile activities claims that there are seven primary motivators for smartphone use which are illustrated below.[1]

At newfocus, we understand the importance of making online surveys as appealing as possible to encourage people to participate through their mobile devices. In line with the development of online survey templates suitable for a variety of mobile devices, newfocus has been exploring the concept of gamification.